How to overcome the fear of blood

How to overcome the fear of blood

Nearly everyone has some kind of phobia. While you may believe that the fear of something is the same thing as a phobia, this is not the case. In fact, a phobia is an intense, deep seeded fear that causes physical symptoms.


If you suffer with a phobia, chances are you know that your fear is irrational, but you still cannot control these feelings. If you want to be a phlebotomist and think that you have a blood phobia, you need to determine if you just have a fear or an actual phobia.

If you just have a fear of blood, you may be able to overcome that quite easily. However, if you have a phobia to blood or needles, you should probably consider another career choice. 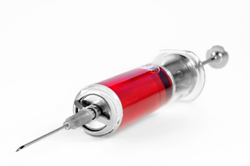 Hemophobia is the medical term used for the fear of blood. It is thought that blood serves as our body’s warning system. Its bright red color is meant to warn us that we are in danger.

Some believe that hemophobia is caused by a traumatic event in childhood or through a genetic predisposition.

While it is true that blood sustains life, it can also carry diseases that may lead to death. Hepatitis C and AIDS are life-threatening diseases transmitted through blood.

Initially, you will experience fear and disgust when you see the needle or the blood. Your heart will speed up and unique to his fear, your blood pressure drops. This causes you to have severe nausea, which may lead to lightheadedness and fainting. While a fear of fainting commonly occurs with specific phobias, this phobia is one of the few where fainting could actually occur.

If you became a vegetarian or a vegan to avoid preparing and consuming food that contains blood and just the smell of blood causes you distress, you have hemophobia.

Self-help in the form of gradually and repeatedly facing your fear is always worth trying when fighting any kind of phobia. Doing this you learn to deal with the fear and anxiety until it passes. That said if the phobia is triggering panic attacks, added support or therapies may be necessary.

How Do You Face Your Fear of blood?

Well, consider preparing fleshy food like red meat. This will repeatedly expose you to the animal’s blood.

Some of the more traditional therapies that are commonly used for phobias may also be useful. Psychotherapy and hypnotherapy can ease the tension that leads to the feeling of sickness that hemophobia brings on.

Therapy for phobias has shown great success. Positive results have been seen after just one session.

If you are afraid of needles, you can attempt to overcome this fear by repeatedly drawing from a fake arm. Start slow and gradually move forward until you overcome this fear. If this causes you to suffer an anxiety attack, you need to seek assistance from a professional.

Phlebotomy On the Job Training

How to practice your phlebotomy skills with a training arm

How Long is Phlebotomy Training for a Certificate, Diploma or a Degree?